I’ve given up on counting the days now as everything seems to me moving very quickly :/ so now my blog post titles will (hopefully) be more focused on such things as mile-stones. Such as – we are now done with demolition woohoo!!! I hate that I feel I need to explain that a tad as we still need to destroy and replace the staircase… and we need to move/demo a wall in the basement – regardless I still say we are done with demo! Hallelujah! or at least close enough to celebrate. And how did I celebrate you ask? By leaving work early Friday and starting framing of course… But I am getting ahead of myself as I am a week behind on this blog and much has been done – most notably, the beams have been installed in the house. In one big push last week (I believe it was Tuesday) my bro (who I now owe deeply . . .) came and grabbed me from work, we bought a jack, he brought a jack, we bought some truly gorgeous 6x6s, went back to the house and got to work. Ten hours later (with the help from my dad, and sustenance brought from our mom and my bro’s wife – love them so) we got all four beams in and the walls gone between the kitchen and living room and the kitchen and entry/dining room WOOHOO!! 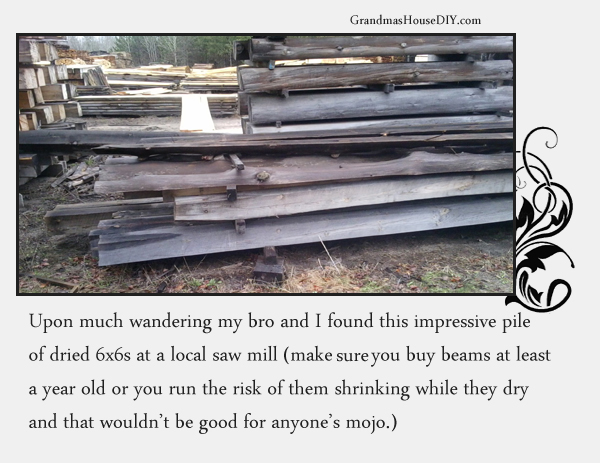 How can I do this to you, you might ask? No after pics? No “finished” pics of the house all cleaned up with all of the walls gone and all of the gorgeous beams now up and in place? It is because I am one mean person, that’s why! Actually, no, days have just started becoming blurs and pictures have gone by the wayside of more important things (something I will, NO DOUBT, regret later). I vow to be better about getting pictures taken, I have a long way to go and I need to get into the groove of taking better pics as we go. Although it is no excuse, my phone takes righteously horrible pictures (case and point the pics below) and I just don’t want to have my $2,000 Pentax camera on a job site so I end up leaving it behind and struggling with my phone (many swear words added in for embellishment here). With the beams up, the demo done, I started framing in the second floor this last Friday after work 🙂 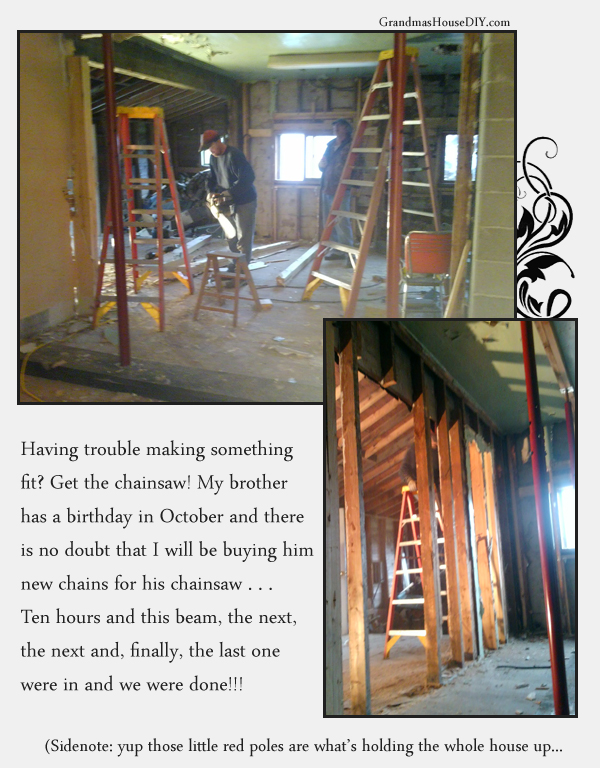 Joe is doing what he can to come and help me on the weekends though he hasn’t ever framed before. Despite a couple of my own screwed up measurements that slowed me down a little bit, framing went very fast and reminded me why I was so looking forward to this stage of things! Joe ran the nail gun and I ran the tape measure and the miter saw. Anyone can frame in and put up a wall and I’ve done a lot of framing in my life (albeit it was several years ago and I feared I had forgotten everything). I am happy to report that I had not forgotten everything and holding my triangle was just like I had been framing yesterday with no time in between. It felt good and it felt like a relief. No more insulation in the face and plaster and lath raining down on my head – no more blowing out what looks like mud from my nose despite wearing a mask. Now I am building the place back and I did just that over the next week after work. I will post pictures of the second floor soon, it is now ready for plumbing and hvac, I got all of the framing done up there this weekend and seeing it makes me so excited I feel like I’m going to burst! Besides that mom and I are packing to move on June 1st!