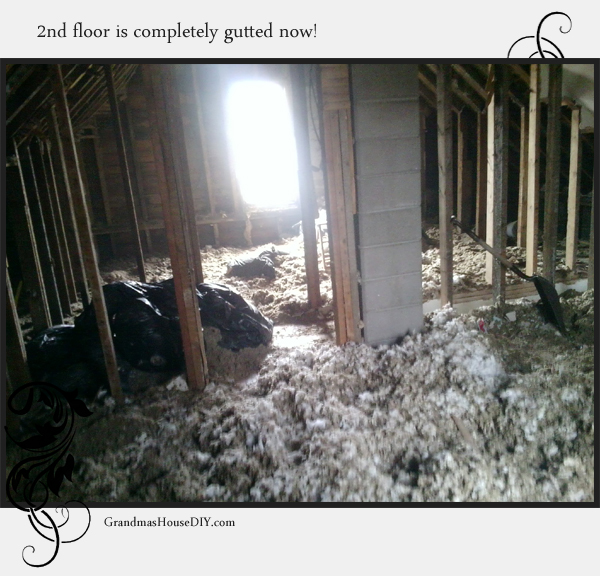 We took on the 2nd floor master bathroom and bedroom in the last two weekends and we got it done! The entire upstairs was plaster and lath, randomly insulated in a couple of places in the walls (though not very much – 80% of the walls had no insulation in them whatsoever) the insulation was some of the first fiberglass material ever used on houses (which is horrible enough on its own) but it’s not asbestos so that’s good news. After our first push to get the upstairs gutted (Joe helped) I took the following pictures when the clean up crew arrived (mom and I the next day) and figured out how the hell we were gonna get it cleaned out. A first attempt at bagging proved hugely horrible. When we took the ceiling down in the downstairs bedroom it was sheet rock so we simply picked the sheet rock out of it, threw it out the window at the dumpster and then bagged up the insulation – very easy compared to this job. Because the upstairs was plaster and lath the insulation that came down with the ceiling was all mixed in with the plaster (plaster in this instance is basically little bits of broken concrete – very heavy) and the lath (because it’s wood) can’t be thrown in the dumpster so that had to be carefully picked out as well. Neither mom nor I had any intention of hauling anything up and down the extremely vertical and narrow staircase. So we decided that the best way to deal with the situation was to shovel it all downstairs, shovel it into bins, empty the bins into the dumpster and repeat. 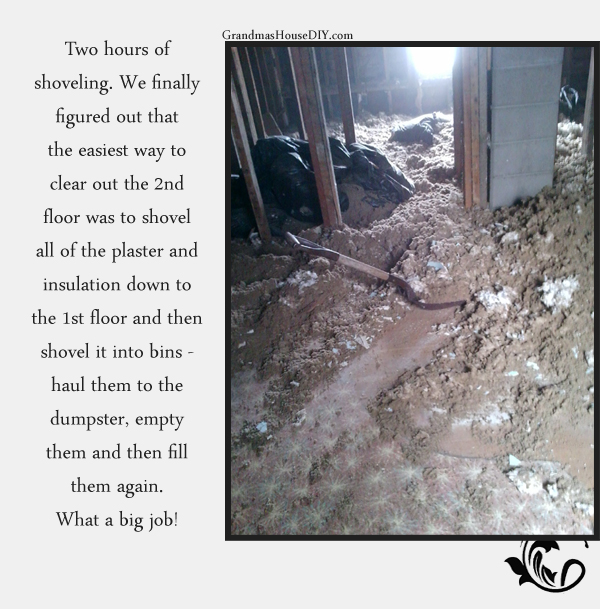 It took two hours. I shoveled out the entire upstairs into the downstairs while mom would shovel/fill a bin, take it to the dumpster which was two rooms plus walking outside, empty the bin, bring it back in and then repeat. Even with masks and gloves and being well covered, by the time we were done – mom and I were absolutely filthy. After I got the upstairs cleaned out I rode the wave of nastiness down to the 1st floor and mom and I took turns being either the shoveler or the bin emptier. After two more hours we had it cleared out and went directly home for showers. We discussed the possibility that that four hours of work might have been the worst four hours of work we have ever done in our lives. It’s likely – the weight of the plaster and insulation etc really put the job at very hard for two little chicks like mom and I. Neither one of us tip the scales at more then 130 pounds soaking wet and she’s 5’1″ and I’m 5’4″ – we’re not exactly the two people you would think of first when it comes to heavy lifting. But she and I have both learned how to get things done without the strength of men. We don’t kill ourselves trying to carry heavier bins – we just take more trips. No matter how little you might be you can still get almost any job done, it just might take a little bit longer.