So, I was standing on a ladder, looking hideous, holding a nail gun and trying to complete the nailers on the outside of the garage one night. This was last Thursday (September 18th) and I had not been expecting him. (Joe doesn’t have time to help me on the house during the week most of the time) He had told me weeks earlier that he had been looking at something that I might like to wear and I had gotten all excited thinking that he hadn’t gotten me anything in a while! At first (jokingly) I asked, “Is it a pink camo teddy?” And then I thought it might be a hoodie… maybe I nice fuzzy black one I could curl up in all winter long… I really could use a nice new hoodie, what a sweet man I have. So, a few days later he told me that it was a ring. There was no getting down on one knee or any of that stuff (just wouldn’t have been our style) but there was a sweeping hug and kiss before he said that he loved me and he’d had something in his truck for three days that he wanted to give me. He handed me the ring and it was perfect. He told me, “I know you never wanted to get married but I thought you might want to wear it anyway.” I would marry him in a heart beat so we are now engaged! Then he had to leave and with one last kiss he told me to get back to work and headed out! 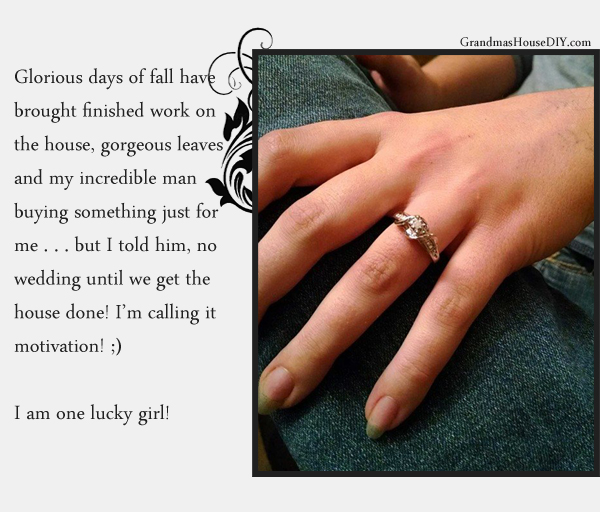 So, when is the date? And all those other questions you immediately want to ask? Well, there is no date lol, except that we first MUST get the house done! I will have no distractions damnit!

We got Joe moved on Saturday so now we are together. He may even have time to help me work on the house during the week now but his hunting season just started so we’ll see. We started getting the garage done on Sunday and I am very pleased to say that now we should have it done by the end of this week, hallelujah! Then we can get all of our stuff in it and empty out the house completely. Good news, getting closer, I’m beginning to feel the end of this project! And I am also very excited to get my stuff back, its been in my brother’s garage since we moved in June and I’ve really kinda missed everything. 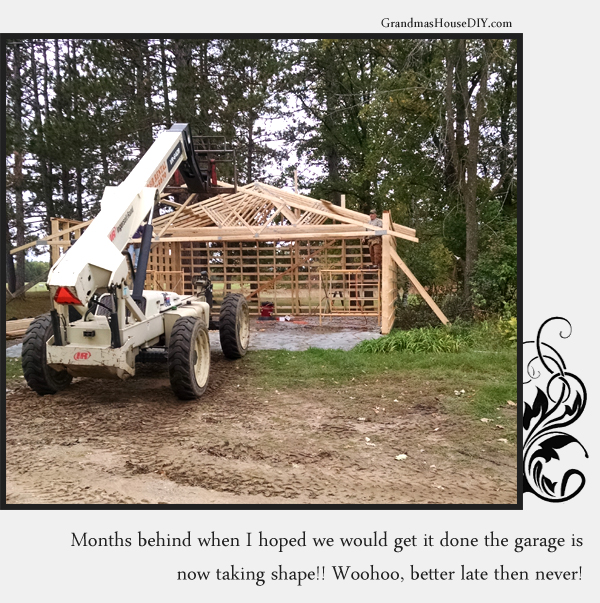 The house is half way to getting totally wrapped up. One last door to put in and I have started adding the electrical boxes throughout the house! Next step, plan another trip to Menards to order the siding for the house, the new pressure tank and our on demand hot water heaters. Just hired my electrician and hopefully will have lights up and working in the house within two weeks. However, plumbing first, hopefully this coming weekend we can attack that as I now know I will be doing that completely alone, but, first things first, getting the garage done.