Putting up drywall tape and mudding the joints has begun in earnest around here. It finally dawned on me last night that I actually have been making some real progress over the past two weeks of taping and mudding. Let us just say that I have not felt like I’ve been making any progress at all and that is pretty damned typical. I’ve been known to put my head down to the plow and not look up until either the field is done or very close to it otherwise I find it too disheartening. So I’ve put up 18 gallons of mud on the walls and that translates to 68 pounds which seems like a huge insane amount though my body really feels it: there is nothing like this job to just kill your hands, wrists and elbows. You can see in the pictures our ceilings are not done yet and that is not the way anyone is supposed to do things. You are supposed to put your ceilings up first so your walls will so-called “hold them up” though that is a bunch of bs. Besides, we have bead board going on our ceilings so that is a whole other beast and, like most things in this house, we do what can with what we have when we can do it and we’re just about out of bead board which means we need to make another run to Menards *shudders* 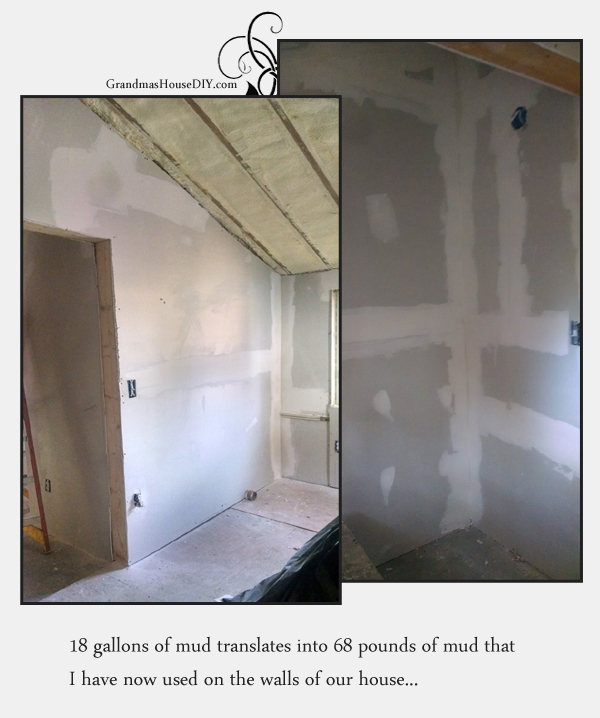 Like everything in this renovation this is not (by any means) my first rodeo when it comes to taping and mudding drywall. In fact, this is probably what I would say was the job in the house I was most confident in starting. I once taped and mudded a 3,000 sqft house without losing my mind years ago and I had kept the majority of my sheet rock mud knives and tools. Note that I said “confident” not “happy” I don’t think anyone would call taping and mudding drywall a “fun” job that folks would look forward to. However, I am wildly weird and will admit that I did look forward to this part because once this job starts the next job is paint and trim and then we’re moving in!! 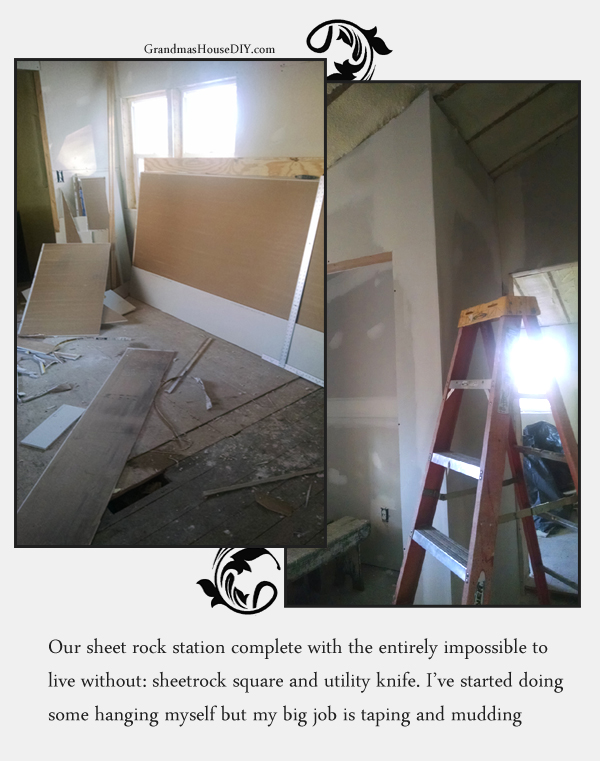 Not only did I keep my drywall tools it turns out that I also didn’t forget everything I had learned the hard way way back in my early days. Funny how you just don’t forget some things. I picked up my 8 inch knife (always my favorite) and just started like I’d been doing it every day. Joe popped upstairs, looked at my second coat that I was finishing up in our master bedroom and paid me an awesome compliment he said, “Babe, it looks professional.” He does NOT give compliments casually and that made me feel really good. It remains a long, arduous and tedious job but the majority of my joints will be finished on second coat. Closets I’m only doing first coat on and trying not to lose my mind in there because we went ahead and drywalled the ceilings instead of wasting expensive bead board so its literally inside corner after inside corner after inside corner and anyone who has done this work before knows that inside corners are just painful. However, I have three closets finished, guest room, my office and the main hall about finished, plus the second floor is almost complete as well. Still a long ways to go and, you noticed I didn’t mention the basement? That’s going on the back burner until we move in.