Over two weeks since my last post and much has happened on the house (pictures coming soon!). The weekend before this last one Joe and I suited up and headed over to the house Saturday morning and he proceeded to prove to me that he is without a doubt the most incredible man I have ever known. He put his arm around me and said, “I’m gonna clean out the basement so you can frame all day.” I was speechless. He said, “You’re better at it than I am and I can attack the dungeon while you’re doing that.” I am absolutely shot, exhausted, done-in and my body is killing me so him taking one thing off of my list is really a big deal for me.

Joe did as he said, he spent two days in the dungeon and pulled truck load after truck load out of it (there was one bright side, where I was framing in 90 degree heat up stairs the basement remained a refreshing 69 degree bug-free zone). The basement had been set up for my grandpa and grandma’s winter wood working shop but the extent of scrap wood down there impressed even me. Joe kept at it and got nearly the whole thing cleared out and hauled to our back wood pile in two long days. By the end of the second day (Sunday) I was just finishing all of the framing upstairs and here my man came. He watched me and hung out for a little while then said in a little voice, “Please don’t make me go back to the dungeon. Can I help you frame?” I laughed so hard I almost fell off my ladder! So, he helped me in the last couple of hours of Sunday and I got almost all of the framing done on the first floor! Another two days of framing on my own and now the first and second floors are ready for me to start the plumbing and electrical.

But let us not talk about the framing that is complete or the doors and windows that will be here soon. Today, this blog post is going to be about the dungeon as I spent this last week and weekend there, not to mention many hours over the past couple of weeks. 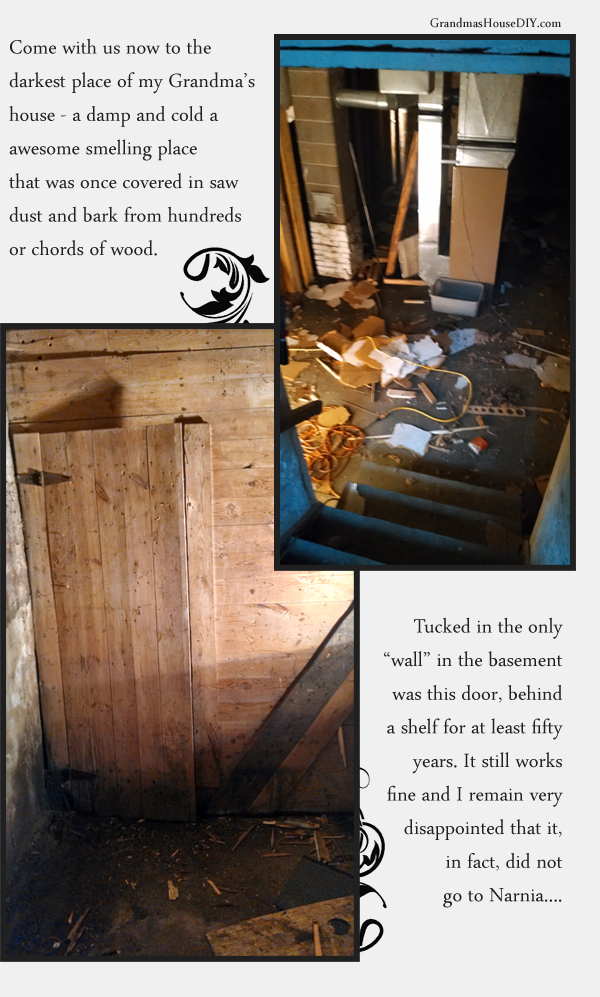 I have to start with where I was this last Friday night, alone and tired, sitting in our dungeon staring at a floor-to-ceiling shelf full of empty canning jars. It was the saddest thing I have ever seen (how can a shelf look so sad?) and all I could do was sit there and try not to cry. It was the last corner, the last piece, of my grandpa and grandma’s house, the very last thing that I had not touched or changed or destroyed or torn out or moved and it was very very sad. Each jar was an empty reminder of what my grandma eventually could not do when her sight and then her body failed her. Each jar all tucked in a row, once holding so much time and effort, now just ancient dust and emptiness. I knew what I had to do and I took up load after load, picking out some as I went to keep, and threw the rest in the dumpster with my eyes closed at the sound of shattering glass. After awhile I couldn’t take it any more and there was still dozens upon dozens of jars left. I sat down and I smoked and I cried. I felt like a failure, it was so silly – what on earth was I going to do with 200 jars? I’ve kept so much and it felt like such a failure on my part to not be able to part with them like I was supposed to be able to do.

Joe found me, dirt streaked, teary and just about hyperventilating. If he hadn’t intervened at that point I would have killed myself throwing the rest of those jars away just because I could not find a good enough reason to keep so many canning jars and the reasonable part of me was at total war with the emotional part of me. I would have got it done though, merely out of principal. He said, “Just keep all that is left, I’ll help you haul them to the barn tomorrow. You’re coming with me and getting out of this basement right now.”

I tried to argue, I had convinced myself that it was some kind of weakness on my part to not be able to throw them away, and it wasn’t even dark yet, I needed to at least continue working on the house in some way for an hour or two. Joe took my hand, unplugged everything, closed my little construction zone down and took me home. I guess this is how renovations go sometimes.

The next day we hauled all of the jars out of there (and kept them) and tore out the four floor-to-ceiling shelves built into the basement in various places. Behind all of those jars and the shelf that kept them was the door you see in the picture. Kinda cool. Sadly it went nowhere but to the other side of the basement and not to Narnia like I had hoped for. 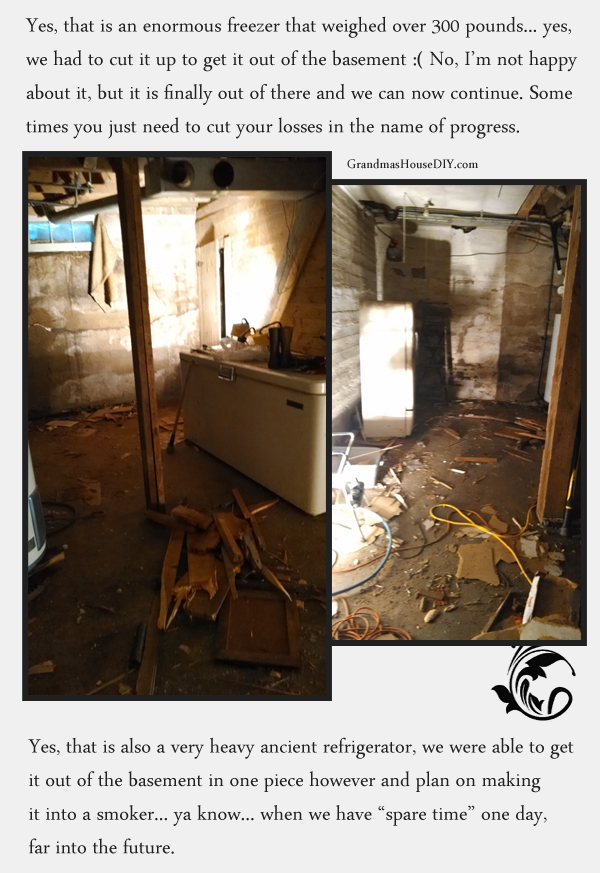 Joe had nearly cleared out the whole basement on his own but the ceiling had to still come down (why in the hell did they put in a ceiling!?), a non-supporting wall had to come down, duct work had to be removed and saved and I had to figure out what to do with the biggest chest freezer we had ever seen in our lives. I wanted to keep it to use for storage, maybe for potatoes or carrots or anything we didn’t want mice to get into or whatever. But there was just no way. I bought a dozen steel reciprocating saw blades and Joe attacked it yesterday (Sunday the 29th) and cut it into four large and nasty pieces. My brother stopped by and they carried the refrigerator out of the basement (We’re gonna convert that into a smoker some day when we have free time… whatever the heck “free time” is as I haven’t seen any of that in several months…) There is still the water heater and all of the plumbing to cut out of there, as well as the old fuel oil furnace (any takers because that, too, has to go!) from there the whole basement needs walls and an egress window that I have officially been talked into adding. It is the right choice, the egress window will make it a legal rental suite and we’re going to do it despite the extra work.

So, we are making progress! 170 gallons of fuel oil is still in my way in the wood shed/my future mud room, it is going this week though so I can put the floor in there – can’t wait! We’re only a couple of days out from framing in the basement and a couple of days out, as well, for picking up the rest of the doors and windows from Menards. One step at a time! Once we get those mentions done it is on to plumbing 🙂