There were two dressers (relics that had been in the second floor since before my grandparents’ had their children… word has it that grandma brought them over on the boat with her), an old wash stand (that sat in my grandparents’ entry way forever) and a piece from the seventies that is half end table half magazine rack – those four pieces I marked for myself. The wash stand and the two dressers had similar curved lines. The two dressers included two mirrors attached to them – all in incredible condition. The wash stand was in the worst condition out of the four pieces, the door in the front had been replaced (who knows how many times…) and it was sporting a sexy coat of brown paint (probably lead based) over eight other layers of paint… all of which were coming off in varying degrees of cracking and pealing – some might of liked the shabby sheik look – I think it looks like shit and can’t believe people pay to make furniture look like this. But to each his own. I was hard pressed to paint the dressers but as pretty as they were (kicking the hell out of myself that I don’t have before pics of those two dressers!! All I have is what’s posted here, after I started priming. I get so excited to start a project I forget the before pics!) they were not solid wood, they were veneered and in the end it didn’t hurt me too bad to paint them. The wash stand took a lot more time. Whereas the two dressers and the little seventies magazine rack took all of twenty minutes of sanding before they were ready to go – the wash stand took three coats of paint stripper over a three day process and a boat-load of wood putty and so, so much, sanding. In the end though after a coat of primer, three coats of black spray paint, two coats of a very shiny water based polyurethane and some “glass” knobs. I LOVE THEM!! And they complete my Hollywood glam look in my bedroom 🙂 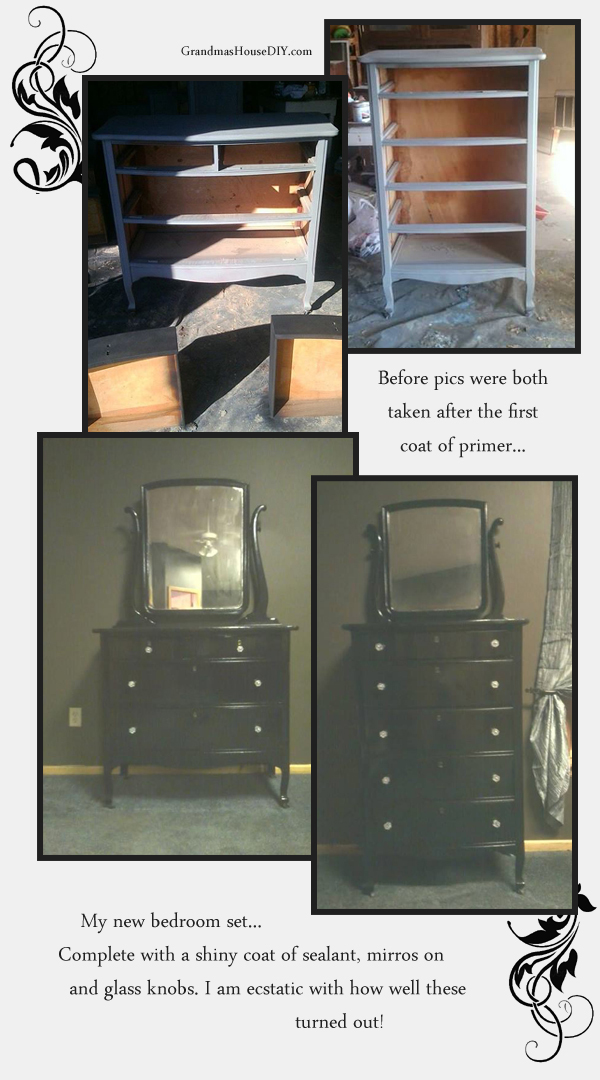 Side note: the Hollywood glam look began all based around one piece of furniture, a big, white vinyl, tufted hassock that I received in the passing of my other grandma (on my dad’s side). I lost both of my grandmas over the course of just a year and a half. It was very hard. They told us “grand kids” to go over to the house and choose what we wanted (my grandma on my dad’s side wasn’t exactly a hoarder or anything but she kept everything). I don’t think any one of us wanted to, we wanted our grandma back and I don’t think that will ever change no matter how old you are. It felt like picking through her stuff, it felt horrible, but I also knew that if I didn’t take something to keep that I would regret it for the rest of my life. I happened to be in the middle of refinishing all of my other grandparents’ furniture so I wanted to get pieces I thought the others might not want or be willing to do the work on. I chose the hassock (an impressively cool and gaudy thing that I figured would only be my taste), a solid wood, carved, old rocking chair in desperate need of new upholstery (more info on that project down below) and an interesting piece that I can’t call a dresser. I guess it’s an entry table as it has two top drawers and two doors, big caw foot feet and it sits quite a ways off the ground (very ornate, so cool and tall) and it has a short mirror that runs along its whole top on the back side. It’s also rather big so I plan on it being my entertainment center one day. Figure the small drawers will be great for wii motes and remotes and behind the doors there would be plenty of room for consoles, dvd players and satellite receivers etc. Will probably have to add more shelves to the inside of it eventually. Inside I found old newspaper clipping of my dad and my aunts and uncles from when they were in high school. I am glad that I ran into these things well after the fact as (instead of breaking down and crying) it felt more like hidden treasure left there from grandma to me.