We’ve been hitting the yard hard over the past week and I’m starting to really feel it. My poor tired, dirty feet 🙁 It’s hard to take pictures of all the work that needed to be done in the yard but let’s just imagine a couple of acres of knee to waist high grass hiding everything from ancient plumbing pipe, giant rock, rotted posts, stumps, downed trees, fencing, barbed wire, concrete block and anything else you can imagine. I want it all cleared out and not just where my horses are going to be hanging out either. I want it cleared out and even capable of being mowed and run through without destroying a lawn mower or breaking an ankle someday. This is my goal. The rough part of this job is that because you couldn’t even see most of the debris that we’ve hauled out of the yard (dozens of full wheel barrels) it doesn’t really look like we’ve done anything *facepalm* It’s wonderful to work outside though! Joe’s been tackling the rock on the front of the house and inside on the chimney with a vengeance. 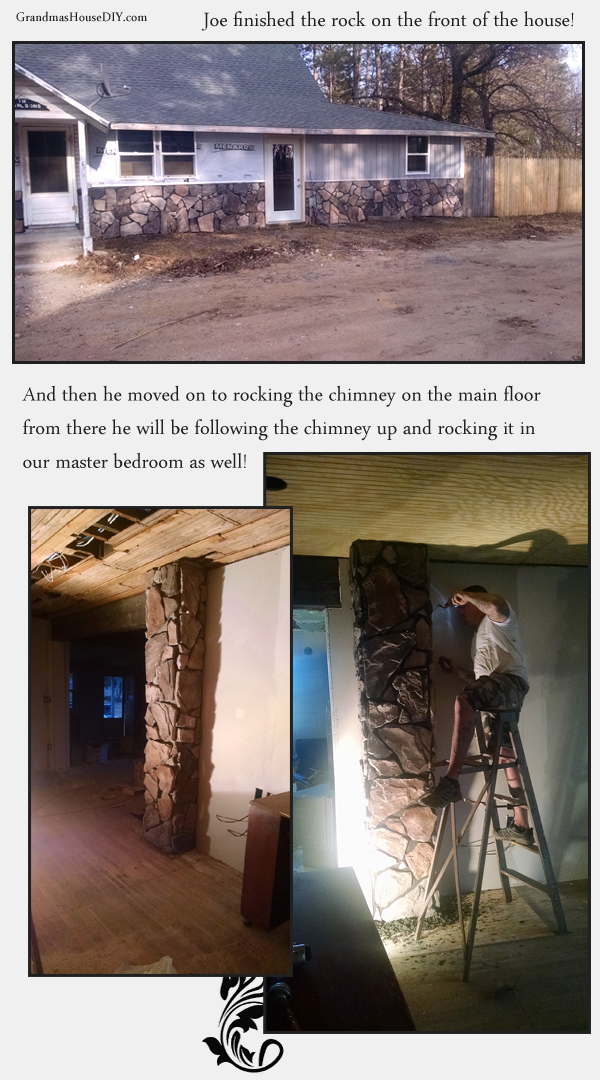 He grouted the front of the house last weekend and over this last week he finished rocking and then grouting the chimney on the inside of the house! This was a true contribution from Joe as I was just going to leave the chimney as it was. I can’t wait to see the chimney all rocked in our master bedroom as well! You might remember my mentioning how the worst thing I could imagine is the rock making our farm house look like we were trying to be some kind of cliche, horrible, knotty pine, rustic, Minnesota cabin *shudders* Thank God I don’t think it looks like that! In fact, I think it looks old, like the house and that it fits like it could have been here forever. (A note on the type of stone: Yeah, it is veneer and Joe hates that it is veneer but I’m happy) 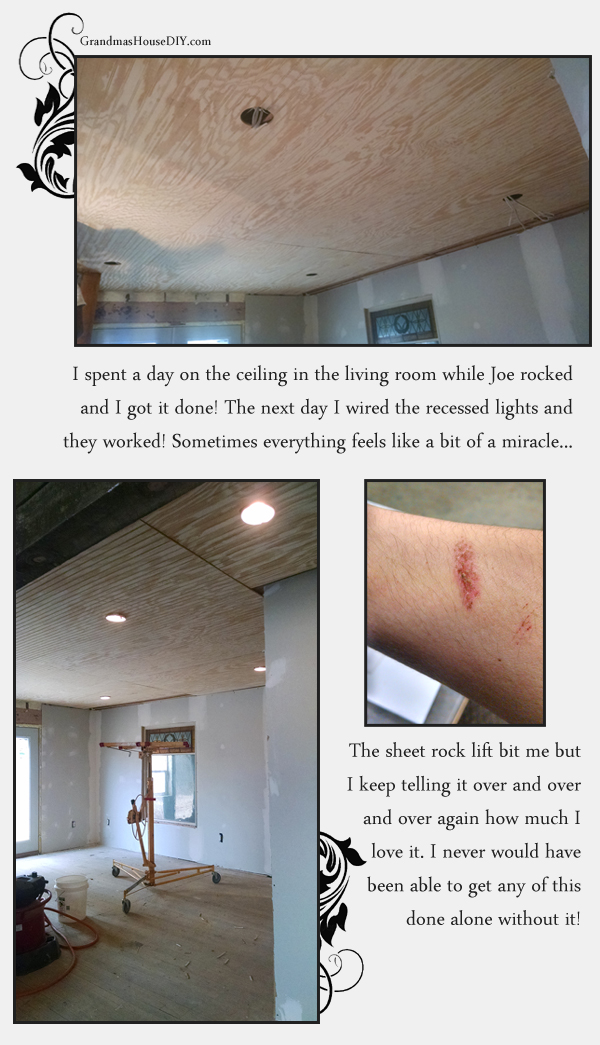 While Joe tackled the grouting on the front of the house last Saturday I tackled the ceiling in the living and got it done! I sure paid for it the next day though – wowser was I sore! Up until now Joe’s been doing all the bead board so, like a couple of weeks ago with sheet rocking, I took over and put some up to give him a break to go fishing and to give me a break from taping and mudding. The sheet rock lift is a heavy awkward beast that bites hard, however, it is a LIFE SAVER. I could never have done that ceiling alone without it. I installed the five recessed lights the next day and all I wanted to do was spin around and dance beneath them. Moving on next to the ceilings in the office, hall, bathroom and extra bedroom. I am getting there!