Most of you have already seen the Gallery and the facebook page because I couldn’t stand it and just had to post photos of all of our hard work! Last weekend Joe finished spraying all of the primer and ceiling/trim paint so much sooner then I had expected that we had Sunday to paint (by hand with brushes and rollers after we took the sprayer back) the entire master bedroom floor! I’ve never bought samples from a paint store before but this time I was so nervous that I went ahead and bought a few at $5 a piece. I bought two samples for all of our paint colors – the master bedroom floor, the office and the rest of the house. Interestingly of each of the two samples we had a favorite and one I just bought to compare to it, in the case of the master floor and the whole main paint color we realized our favorite was off and picked the other sample! So, if that’s not a great example for the reasoning to buy samples I don’t know what is! The master bedroom ended up with a color called “Sooty Lashes” that Joe and I both thought was too blue (or green or something) on the paint swatch but loved it when it got up on the wall. I knew we would be able to go really dark with the master paint because half of the walls are white bead board. We LOVE it! 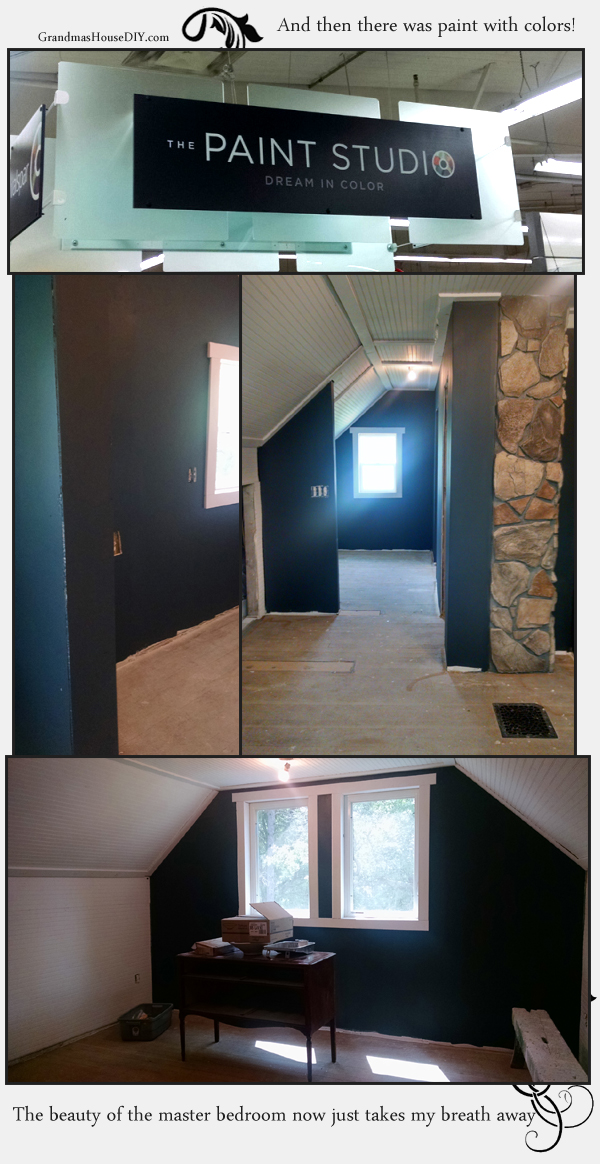 I took the afternoon of both Thursday and Friday off and, earlier in the week I had painted our guest bedroom and Joe had mentioned we could just do one room a night and I bristled, I wanted it done much sooner then that! So Thursday and Friday after work I hit it hard and mom came and helped me. What’s that tag line on the Home Depot commercials? “Let’s do this!” Words that were said many times Friday night when we rallied and finally finished painting the whole house! The paint color is called “A touch of gray” and everyone tells me it is a lovely light gray that they like. My dad and I seem to be the only people that think it looks kind of blue and I don’t really like that it looks blue to me… oh well, I still really like it and it does exactly what we wanted it to: Light, calming, easy on the eyes and just dark enough to set the white trim and bead board off!

I had initially taken pictures of our samples on the walls but once I got to the office I was too ashamed and now, of course, wish I had just taken the damn picture. I ended going back to the hardware store twice more ending up using a total of six samples for just that one room. Ugh. I wanted something light, something robin’s egg blue and something kind of aqua, everything I picked ended up wrong until finally I found something that was close called “Blue Bottle” and went ahead with it. Later I mixed all of our paint samples together (the six for the office and the two of gray for the whole house) and ended up with a whole gallon of satin light gray/blue/green paint that I can use in the basement so I don’t feel quite so bad. 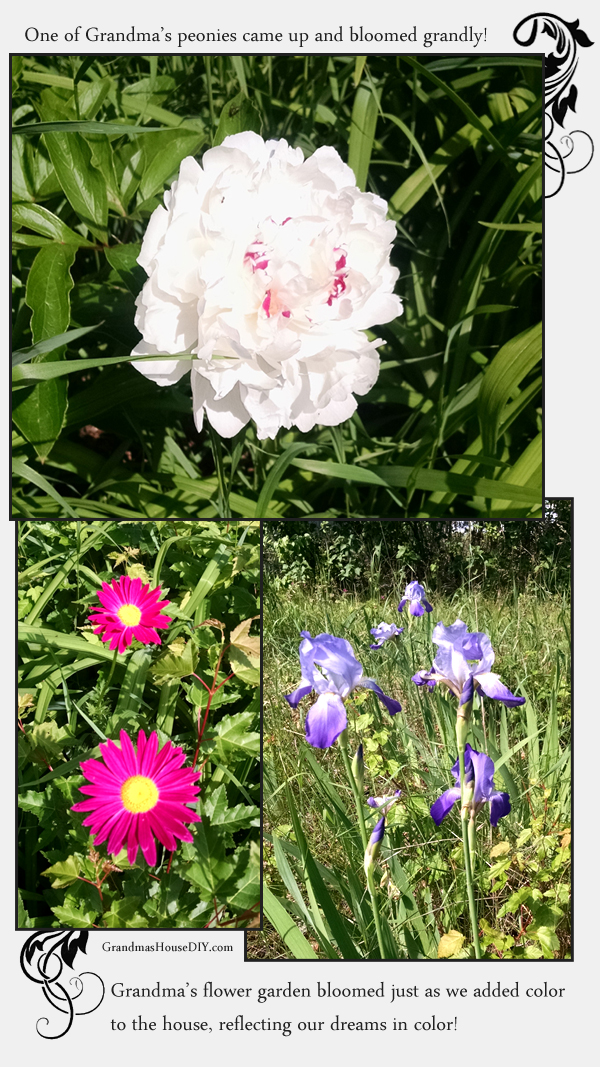 During this same weekend Grandma’s flowers stood up in her old overgrown flower garden and bloomed like they haven’t bloomed in years! Even a stray peony that had never grown there before popped up and opened in all of its glory! I can’t wait for the chance to clean out this garden and give all of grandma’s flowers a chance to really shine again someday. It was like the flower blooms were adding color to the outside as we were adding color to the inside, it felt like Grandma and Grandpa were with us. This weekend (with painting done on Friday) Joe and I put down the new floors in the entry/dining room and the guest bedroom, can’t wait to show you guys! We have a floor sander rented and to be picked up this coming Friday morning so, hopefully, we will have the floors sanded and ready for stain by Saturday!