I have no doubt that there is probably some life lesson to be learned here but I just don’t have time for this shit. I have spent a rather large percentage of my life working (or playing) injured and have a pretty lengthy amount of patience for it but now, after nearly two weeks, I have become essentially frustrated with my own body. I can work and play through pain, no problem, but this back injury has taken my breath away and has almost taken away my ability to bend over or take a step on my right foot. I hit up my muscle specialist/chiropractor last week on Friday in the hopes of getting three people to attack me for half an hour would at least kick me in a healing/not-hurting-so-damned-much direction. Of course (directly after my appointment) going back to the house and starting work on the new floor for our mud room was probably not the right course of action. I have been told that I am foolish when it comes to my own body etc. but I really don’t get the point. I have work to do and I’m going to do it. What’s so foolish about that? My mother is used to me by now and darned right laughed at the ridiculous way I was getting around while working on the house on Friday night. I told her to call me Quasimodo and she decided “Gimpy” was a better nick name. We got the joists in the floor done, my getting them measured and cut and her screwing them in. I am very proud of her, when I tell her she can do something, even when she doesn’t believe me, she tries anyway and is far more a capable human then she has ever given herself credit for. And, maybe even more fantastic about this incredible woman – she only told me once I should go home and stop working, then promptly gave up and helped me finish so I could, in fact, go home. 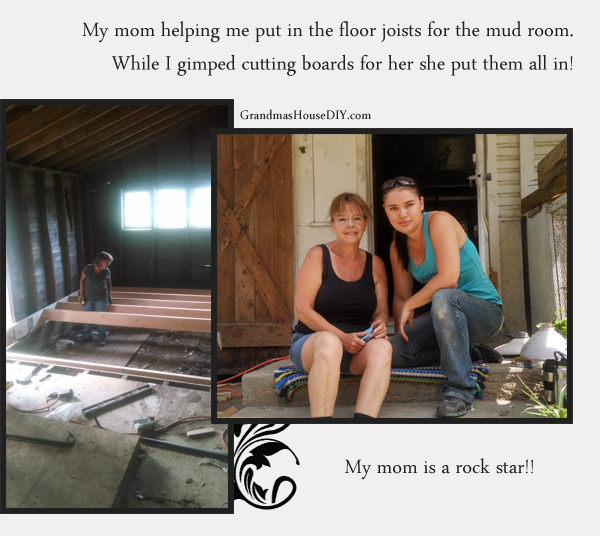 So then this weekend came around and watching myself work was almost as bad as watching paint dry. My heart is screaming that we are SOOOO far behind and my back is telling me “So what?” and just not allowing me to move any faster then a fricking snail’s pace. It is also draining me like few injuries I’ve had in the past – I once tore the cartilage between three of my ribs as well as cracked a rib on top of it and the way that injury just would not stop reminds me of this back injury. It just won’t let me be. I take a step – it stops me. I bend over – it stops me. I try to sit – it stops me. It’s like a wall. I would take a bum knee or a bad foot over this – those things I can work around (and have many times) this is just a pain in the ass. With that rant out of the way there remains little I can do about it except to work as fast as I can (as I have been doing since the beginning) even if it feels like I really am building Rome now. 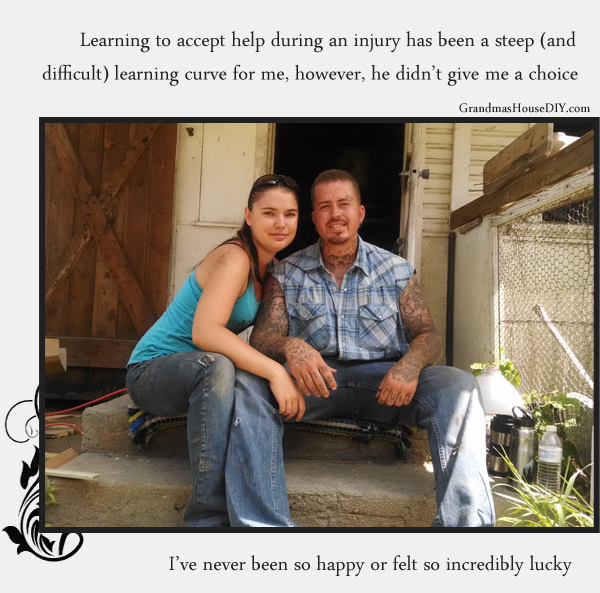 Meanwhile, while I was still desperately trying to keep working regardless, Joe showed up (or got up early without ever bothering to tell me) and finished several projects I had begun on the house and had planned to finish this weekend. He not only got them done, he did it right, without complaint, without my having to ask, or beg, or admit my own failure. He just finished them and helped me up the stairs and told me I didn’t have to do them, or worry about them anymore, because they were done. It was the nicest thing any man has ever done for me. So I’m still working on the house but I know now that I really am not alone all the time at least.