I wish I had posted more about the plumbing and I’m going to say the same thing later when it comes to the electrical. However, quite frankly, it’s pretty hard to post about it, or even take decent pictures of it. I mean, really, whether its a plumbing pipe or an electrical line sticking out of the wall, its not really all that exciting and once you take one picture of a pipe or an outlet you’ve kind of taken them all. Sadly though, I think between the plumbing and the electrical we’re looking at a good 70% of the time I’ve spent working on this house and I’ve documented it so little here. I had one more melt-down, this one was perfectly girly and pitiful with the crying on the floor and the whole lot. I took off all of last week to attack the electrical just like I took off a whole week awhile back to attack the plumbing. I wanted to get the entire second floor run and done so my insulation man could come in and spray it – which I am very excited to report, he is spraying it today! I also got a large chunk of the main power lines run for the first floor of the house, next step is to finish them and then attack the basement. With my insulation guy hitting the second floor my next, most urgent, priority is getting some heat in the house so we have plans to get our wood stove this coming weekend. Working in a cold house like this has ultimately kicked my ass (not to mention my motivation) but I was lucky because I did have a seriously great fall and its only been truly cold for about two weeks. 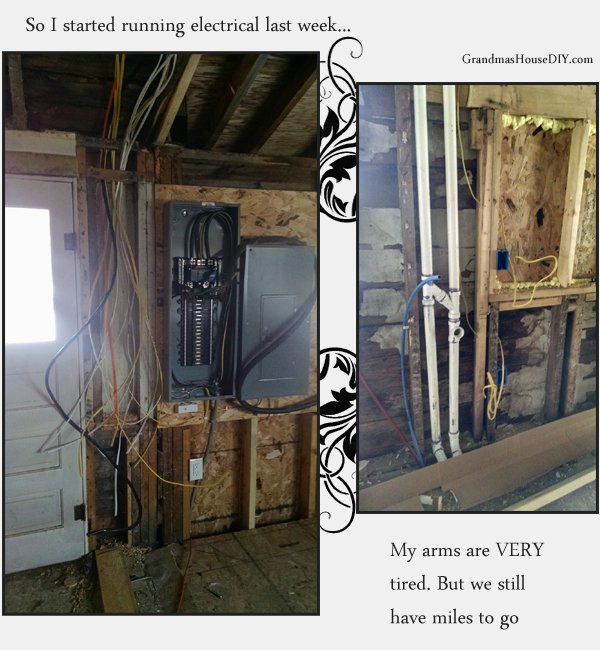 We had Tuesday of this week off from work (Veteran’s day) so my mom and I started hauling all of my stuff over from my brother’s garage to my new garage which is now just about totally finished! (Pics coming soon!) It was a great thing. I have missed so much of my stuff! From all of the furniture I refinished last year to all of my bins of books, really almost my whole life and now its finally taken its second to last step before it comes home for good. We weren’t able to get a couple of pieces into her SUV (our dining table, a six foot chest freezer, a large desk and a sink base for in the basement) but the dozens upon dozens of bins and other furniture pieces are now here! I had not realized how much of my life was in storage but, the truth is, Joe and I put my life on hold 7 months ago and there’s nothing to do about it but get the house done. 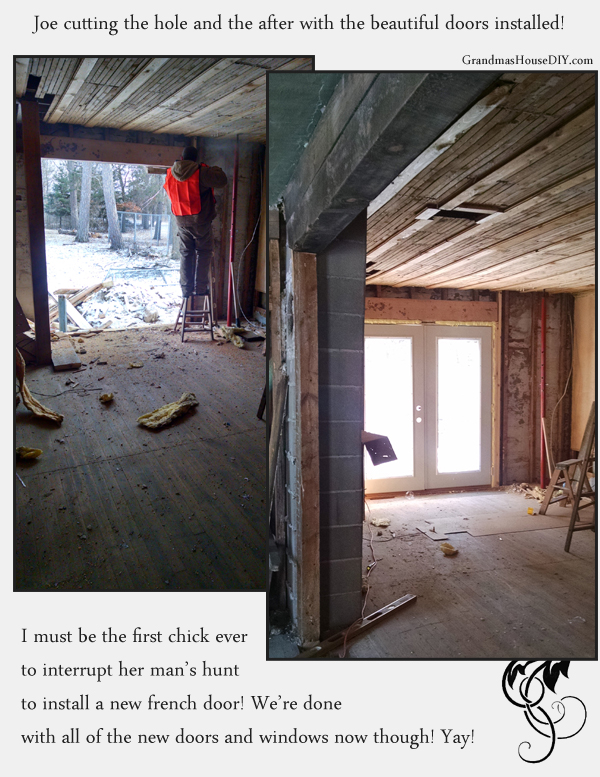 Meanwhile, inside the house, this past Sunday I pulled Joe in from hunting in the morning and we promptly and finally got in our big french door. Joe and I have no problem getting motivated and doing things we can do on our own but it was clear that I simply was not going to be strong enough to carry one end of the damned thing. It was a beastly 7 feet by 6 feet of solid glass and awkward as hell. I felt like a very little girl standing beside this thing and so its been sitting in the house for about three months now… no I’m not proud of my procrastination but I don’t think anyone would blame me. I framed it out, Joe cut the opening and Joe and my dad put the sucker in with my standing by losing years off of my life as I watched. So many heart attacks… so… so many. But now it is finally in and we are DONE DONE DONE with all of the new doors and windows! May we never have to put in another! Granted, they weren’t so bad, actually I would say putting in doors and windows is a piece of cake compared to the plumbing and the electrical I just went through. Joe went back out to hunting and I went back to work on other projects.

This has been a long haul, as all renovations are, and I have found myself flagging many times over the past couple of weeks. I’m very tired. Bone tired. Shot to the bone. Exhausted. In desperate need of some kind of break. I want to have fun again, dammit!! I need R&R! And there really isn’t any fixing me. I need the kind of break that lasts months from the work I’ve been doing on the house (mental and physical) and that won’t happen until we move in. God knows this was all my idea and I’ve run into nothing that hasn’t surprised me. There have been no real set backs. No rotting foundations or surprises, we ran into nothing I had not expected. The mistake I made when planning the time line was pretty simple, I had expected to be able to keep on at the pace I had been setting at the beginning of the renovation. And if I had been able to do that, we really would have been moved in by now, but I’m just shot especially after the back injury. So, I am still hacking away at it and I realized the other night that I am well over three quarters of the way done, hell I could sheet rock the second floor right now! I’m trying very hard for that incredible news to perk me up but I fear my weariness has killed any excitement. But, we are getting there!