So, I had a full-blown, lost-my-shit-totally, almost-hyperventilated-twice, thirty-minutes-of-inconsolable-hell, total-and-complete, melt-down. But first, some background information: I took last week off from work and began my Monday morning heading to the house with the goal of running all of my drain and vent lines for the entire house. That’s the drains and vents for three bathrooms, two kitchens and two laundry rooms on three floors. First, in preparation, Joe jackhammered out the basement and I spent three nights the week before, after work, digging and digging and digging for the sub pump (imagine a large garbage can that you have to bury in your basement). And it was in the basement where I started Monday, putting in the drains for two sinks, one shower/tub combo, a toilet and a washing machine plus the vent lines. The next day I started with running the vent up through the middle of the whole house. 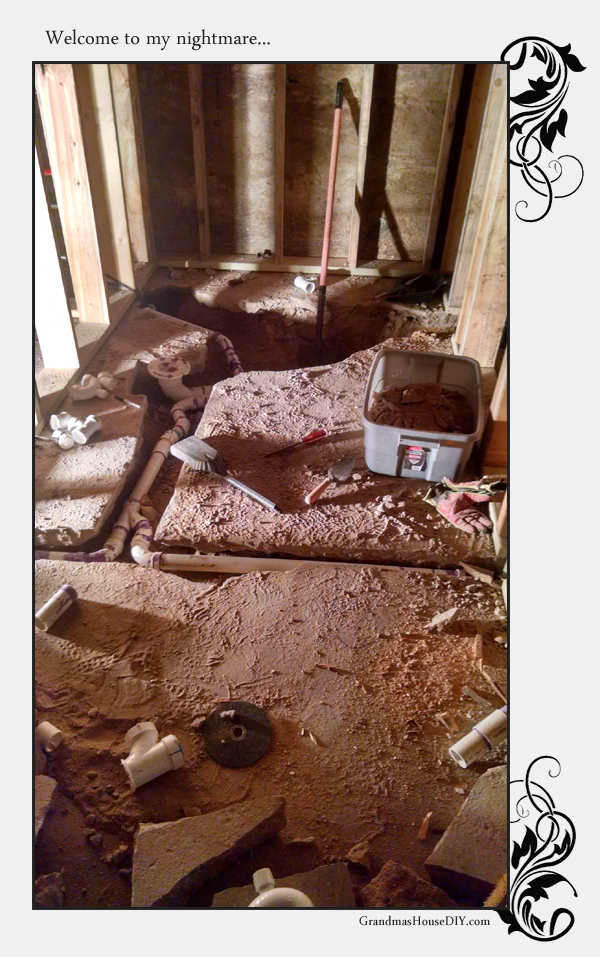 From that vent I went ahead and also put in the drain for the kitchen sink on the main floor and then on the next floor to the master bathroom sink as they all shared the same vent. With that done I went ahead and tackled the master bathroom, by the end of day three I had the basement drains in and the master bathroom drains almost done (shower, tub, toilet and sink) with their vents done except for the new hole in the roof. From there I tackled what I was most apprehensive about – the main floor bathroom and laundry. I spent the majority of day four just prepping, lots and lots of holes to drill (ugh…….) – here I am in the crawl space: 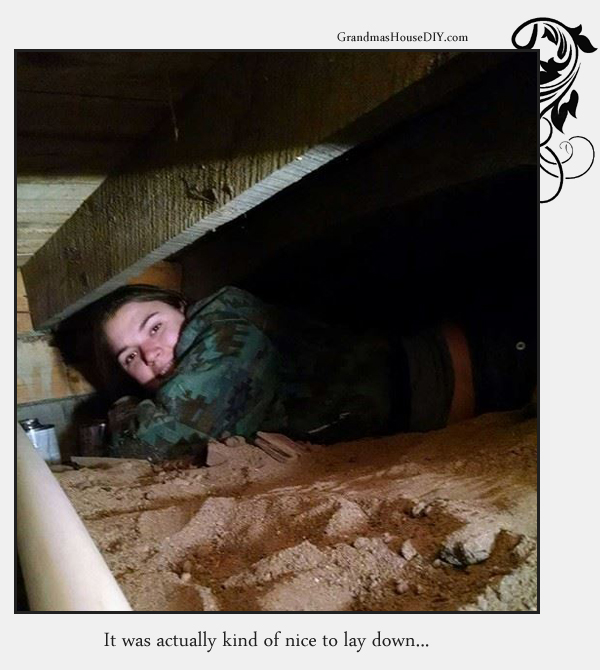 Interestingly enough after being on my feet up and down three stories for four days it was kind of nice to get a chance to lay down for a while… Of course that wore off pretty quickly and the itty bitty tiny hole I had to squeeze through to get into the crawl space just about managed to rip my coat off every time I tried to get out of that damned space – good thing the house work seemed to have worn off my fat from last winter. I can only imagine how funny it must have been when I got stuck at the boob level with my feet flailing out of the hole while my mom held the ladder trying not to lose it… or take pictures. With the prep work done and the drains started I attacked the main floor bath and laundry on day five – Friday morning – it will forever have an ominous feeling – cue the Jaws music now. Joe had taken Friday off to hunt while I worked on the house after he had run out of town in the morning. So he was off hunting and I was alone… It didn’t end well… After arduously working at it all day I realized that what I was working toward I had put in wrong and had to redo but I didn’t have the extra part to do it… and the idea of going to the store again was just enough to make me promptly lose it. 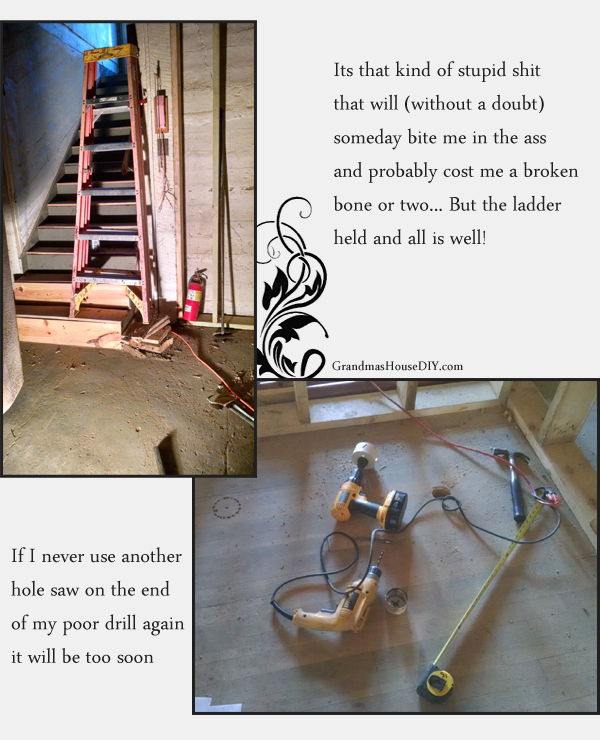 And it wasn’t a baby girl meltdown, laying on the floor crying because the turkey I had been basting all day had ended up burning. Nope. This was a manly melt down complete with my seeing red to such an extent I almost headed for the barn for a bat I knew was there. My fingers and my hands ached for something heavy, something destructive, something I could wield and destroy with. Destroy what? – You might ask – I don’t even know. What I ended up destroying was Joe’s after noon hunting as I needed him as a witness to my apocalyptic tantrum. Perhaps it was the five days straight alone in the house. Perhaps it was just one too many trips hauling dirt out of the basement (my pit of hell). Perhaps it was all the glue and primer I’d been sniffing for five days straight to the extent that I didn’t even notice the smell anymore. Maybe it was the glue in my hair or the fact that I felt ugly and guy-like. Whatever it was it was a combination for rage I haven’t known since I was a kid, the type of uncontrollable, makes-no-sense, to the point that I literally almost hyperventilated twice. 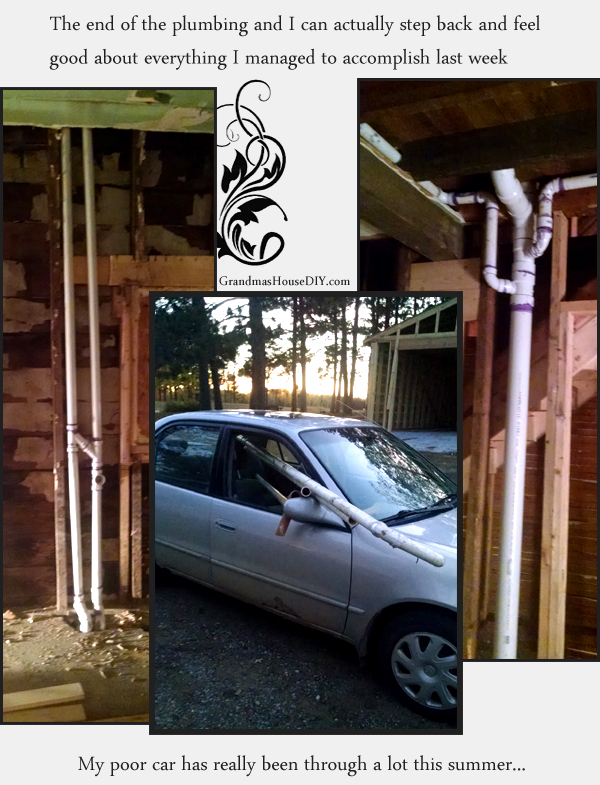 So Joe headed to the store, bought me a pack of cigarettes and the part I needed to fix it. He came down to the basement and tried so hard to figure out the problem and help me fix the issue. There was no fixing anything that night and I was so damned done. Of course, I did fix it and finish it the next day. Now, with all of these drain lines complete I can look back and feel good about what I accomplished. It was a lot and it was really fucking hard. But I got it done. Three things I know for certain: I never want to use a hole saw again, those damned things will rip your hand clear off. I never want to go into my fleet store in town here again but I most certainly will, I averaged three trips a day during that long week. Now, on to the water lines.